RWIBrokers.com is in no way associated with Activision Blizzard and its subsidiaries. This report provides a baseline for investment decision making purposes and should not be solely used when making final decisions. For more information regarding the services provided by RWIBrokers.com you may contact our helpdesk at clientservices@rwibrokers.com or through the phone number indicated on our website.

Activision Blizzard is an American holding company that owns and operates multiple businesses within the video game industry. The subsidiaries of the company are involved in several activities such as video game production and development, esports organization, and motion picture production. Activision Blizzard was responsible for the releases of some of the most popular, award-winning video game franchises such as World of Warcraft, Call of Duty, Diablo, and Overwatch.

Activision Blizzard is currently the largest video game company in the Americas and Europe in terms of revenue. Its stock was first made public through NASDAQ on October, 1993 at a price of USD $0.83 and was listed on the S&P 500 stock market index since August of 2015.

The global video game industry is currently valued at an estimated USD $150 billion in 2019 with forecasts predicting an annual growth rate of 9% over the next 4 years (USD $211.7 billion by 2023). The growth of the market has been attributed due to the following:

Some of the key players in the worldwide industry include Sony Entertainment, Microsoft, Nintendo, Ubisoft, Activision Blizzard, and Electronic Arts. 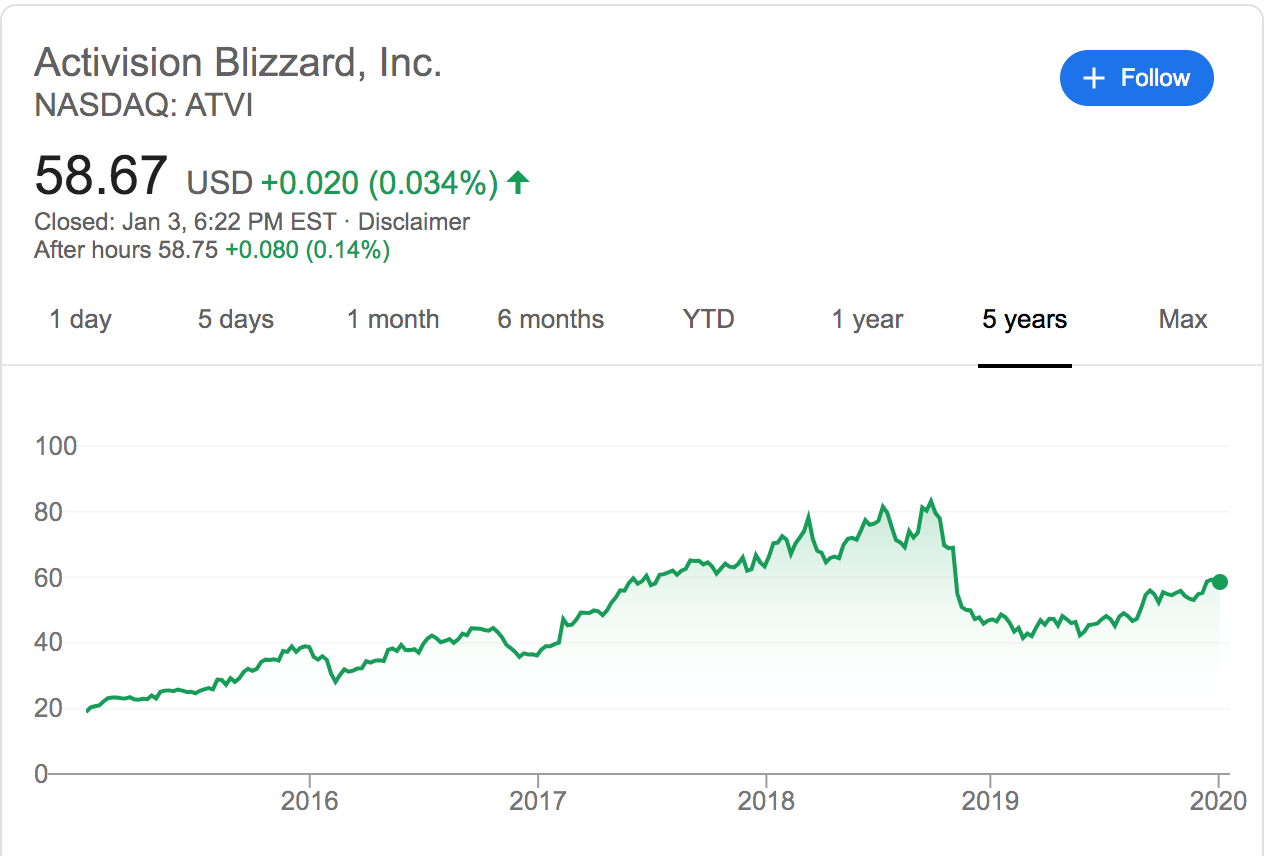 In the September of 2018, ATVI was valued at an all-time high with USD $83,19 per share. However, a poor financial performance outlook at the time combined with lack of product releases and increased competition for active players resulted in the stock suffering a 44.88% decline to USD $45.85 per share just three months later. As of 2020, the ATVI’s value sits at an average price of USD $58 per share, a 23% increase from 2019’s opening price and a 206.88% increase from 2015’s opening price. The stock is currently sitting at some of its highest values since 2018 but has yet to fully recover from the 44.88% drop.

Since 2015, ATVI’s stock exhibits a pattern where its value grows for a number months before suffering a drop. The periods that these drops occur tend to be shorter than the periods of growth resulting in a general trend that shows a steady increase in stock price over the last 5 years (See Figure 3).

Figure 3: ATVI’s stock graph with trend lines that mark the substantial increases and decreases in price. The blue line shows the rising trend over the last 5 years. 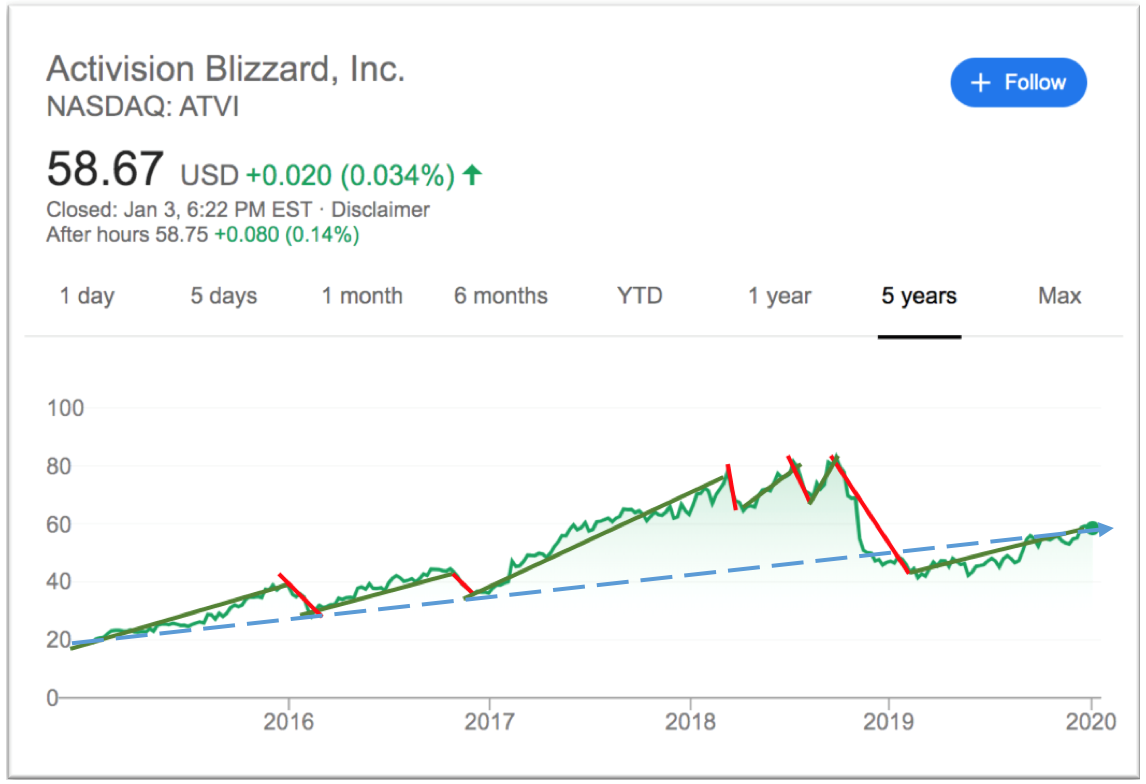 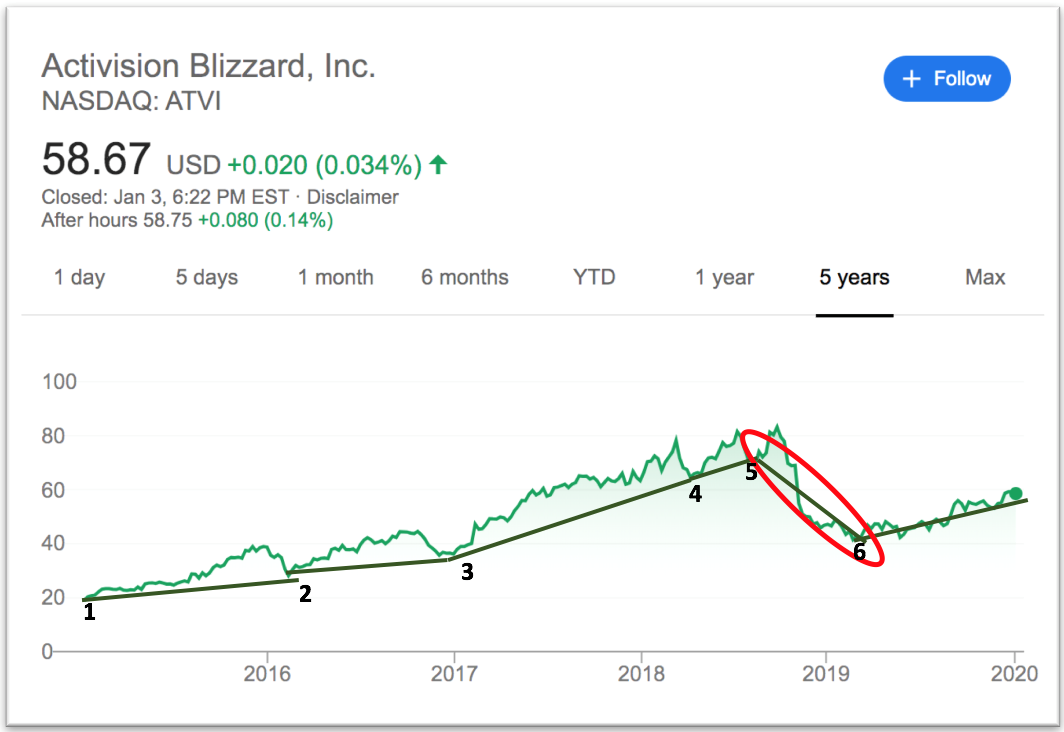 Activision Blizzard’s annual revenue and net income in the 2018 fiscal year was reported to be all-time highs of USD $7.5 billion and USD $1.8 billion respectively (annual report was released in February, 2019). Compared to the previous year’s report, revenues grew approximately 6.88% while net income grew a massive 564.11%. The boost in net income was largely attributed to the company’s reduction in general administration and selling expenses as well as the reduction of taxes. The company’s production became more efficient considering the revenue’s growth rate was 10 times larger than the cost of revenue’s growth rate (See Figure 5).

Furthermore, the company’s 2018 Operating Margin and Profit Margin were calculated to be 26.5% and 24.2% respectively. This is an improvement to the 2017 statement’s margins of 18.6% and 3.9% respectively, a direct result of the company’s change of structure to implement more efficiency and increased efforts to produce more profit per revenue dollar earned.

In 2019, the company teased new entries to the Diablo (latest entry released in 2012) and Overwatch (first and only entry released in 2014) series but has not revealed a release date for either games. This, combined with new consoles that are expected to be released in late 2020 (Sony’s Playstation 5 and Microsoft’s Xbox Series X) and forecasts for value increases in the video game industry, paves the way for the stock to benefit. It should be noted that Activision Blizzard’s stock grew substantially during the years of 2005 and 2013 due to the release of new video game consoles. Therefore, it is possible that the release of the new consoles may have a more critical impact towards the stock’s value than once thought.

The company currently possesses a strong financial position. Although it is very likely that the company’s annual; revenue and net income will be lower in the 2019 fiscal year, the net income will still be much larger than 2017’s amount. As such, the stock should not be highly affected negatively by the upcoming 2019 annual report as earnings remain strong going into the 2020 fiscal year. An important note to consider is that during the 2017 fiscal year, the stock prices were slightly higher (peaking at USD $78 per share after the 2017 annual report was released in April, 2018) than they are currently despite the fact that net income was much lower during that year. The higher net income in the coming fiscal year gives a promising outlook that Activision can at least surpass the USD $65-$70 mark by the end of 2020.

All the factors stated indicate that Activision Blizzard’s stock is a buy at its current price as it should likely rise in 2020 and possibly early 2021 as well. Long-term holding of this stock should yield future benefits.